Our friends Vanessa and Robert, visiting from the mainland, are avid snorkelers.  The other day, having already hit some of the most popular snorkeling spots in the area, we went for a snorkel at Hapuna Beach.  Hapuna is known primarily for its broad expanse of sandy beach—not all that common on this island—and, when conditions are right, a slamming shore break that provides great boogie boarding.

But Hapuna also offers some very nice snorkeling.  We snorkeled out along the rocks that flank the north edge of the beach and around the corner in the direction of the Mauna Kea resort.  There’s not as much coral as, for instance, Mahukona or Makaiwa Bay.  Instead, it’s mostly rocky ledge bordering extensive, relatively shallow sandy bottom.  This sand-rock ecotone attracts a different assortment of fish from the coral-dominated sites we usually snorkel at.  Large surgeonfish and chubs are especially abundant, many of the coral-eating small butterflyfish are relatively uncommon, and yellow tangs are virtually absent.  I’ve seen milkfish and bandtail goatfish at Hapuna, but nowhere else.  Here are a few photos, not necessarily reflecting the differences I’ve just described. 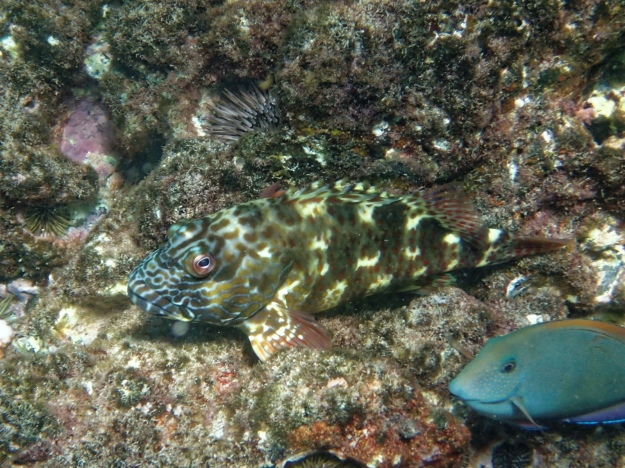 The ubiquitous stocky hawkfish with the even more ubiquitous brown surgeonfish. Note the rocky substrate—not much coral here. 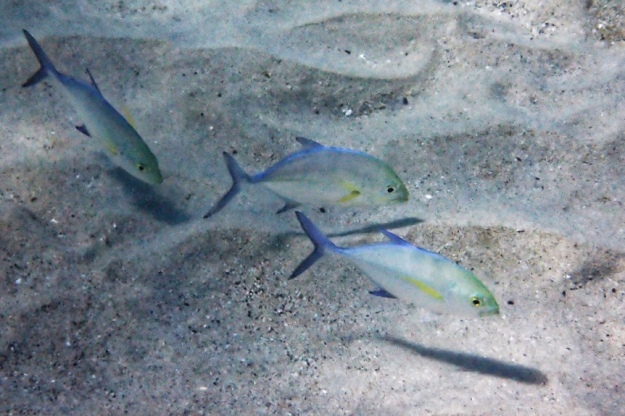 Bullethead blenny. These small fish are supposed to be quite common, but are hard to spot, spending a lot of time peering out from their burrows. I’ve only spotted one a handful of times, and have not until now had a chance to get a photo. This fish belongs to the same genus as the redspotted blenny shown in the February 18 post. 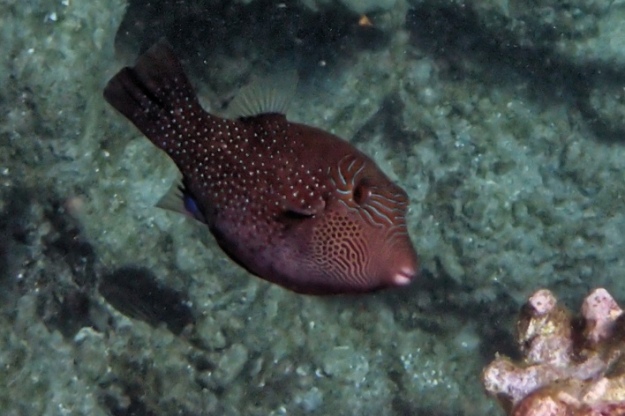 Ambon tobies are farily common at most of the sites I snorkel, but they’re skittish and difficult to photograph. This one was unusually accommodating.