As I’ve been mentioning, the Mahukona reefs are subject to considerable spearfishing pressure. I’m actually quite surprised that target fish species—chubs, goatfish, various surgeonfish, and especially parrotfish—are so abundant despite the daily spearing activity.  It probably helps that many of the spearfishermen are rather inept, incapable of hitting anything alive.

It’s not uncommon to see fish that have recently received, or have recovered from spear wounds.  More than two years ago I spotted a palenose parrotfish with a savage, fresh spear wound on its back.  I was sure it would not survive.  This recent photo shows that it did survive, and in fact appears to be flourishing.  It’s always a pleasure to see this guy, which I do nearly every time I snorkel at the north side of Mahukona.  [Update: This fish seems to have disappeared as of spring 2015.  I hope it just moved on.] 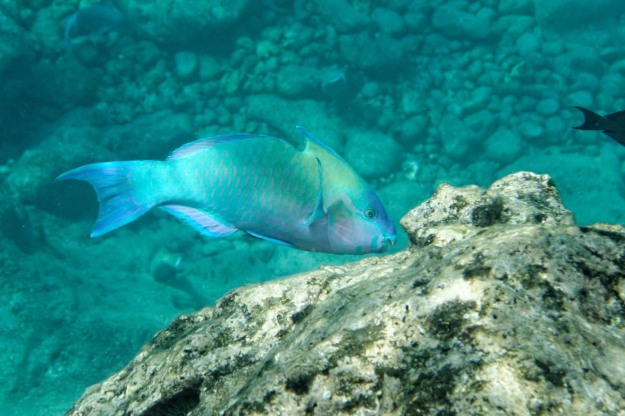 My friend the wounded palenose 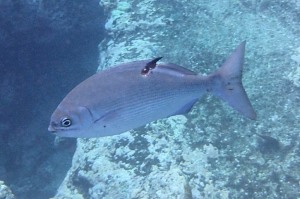 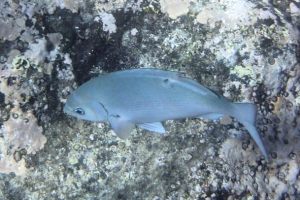 I recently saw and photographed a gray chub (AKA pacific chub, nenue) with a fresh spear wound on its back.  I got another photo of the same individual thirteen days later.  I was surprised at how quickly the wound had healed.

These are just two of the many fish I’ve seen at Mahukona and elsewhere that have survived wounds from spears or from other fish.  Several of the large ember parrotfish that live around Mahukona appear to have old spear wounds.  And then there was a Hawaiian Sergeant missing its entire caudal fin (tail) that could be seen regularly for several months before it disappeared.  A wound of that nature is obviously the result of an attack by another fish (or other marine animal) rather than a spear.  Anyway, it’s gratifying to see how resilient these fish are.